On June 3rd the world mourned as we bid farewell to one of the most recognisable names and faces on the planet, the great Muhammad Ali. As a huge fan of the “greatest of all time” it seemed a fitting tribute to take a visit to the Muhammad Ali at The O2 exhibition to see what was on offer and soak up the story of one of earths greatest figures. 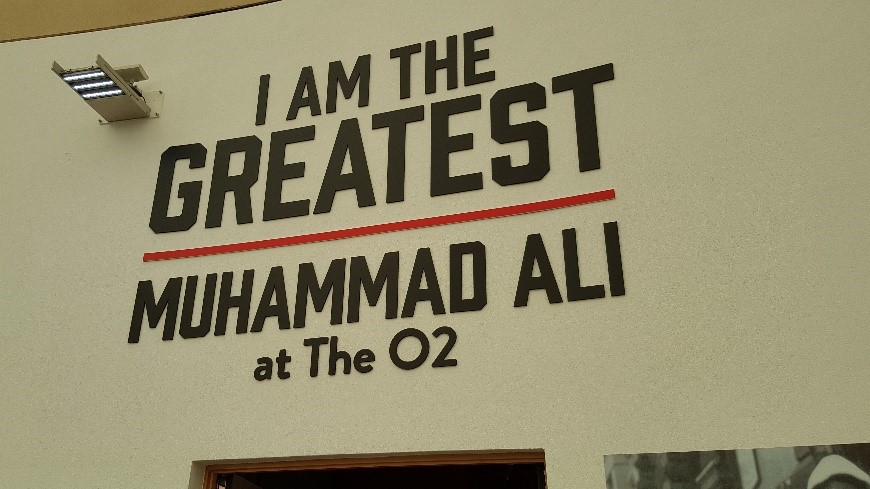 Having decided to make the pilgrimage I consulted the exhibitions ticket website only to find that purchasing tickets for the same day was not an option. However, determined as I was to fill a day, I found that you were able to purchase tickets at the box office at the arena and figured it a risk worth taking given it was the middle of the week.

The website does offer a disclaimer recommending you purchase in advance to avoid potential disappointment, but as it turned out I had little to worry about. Do note however that tickets do have a time slot and you will be required to enter within 30 minutes of that time. Once you are in you may spend as long as you like at the exhibition, but they limit entrants due to a special area at the end where capacity is restricted. An adult ticket will cost you £18 with concession tickets at £15 and children £9. Kids under five go in free.

Travelling to the exhibition was a breeze, taking the Jubilee line on the tube to North Greenwich put me right on the arena’s doorstep. The station has plenty of signage to direct you to the O2, and once you step out of the station the arena itself is right in front of you. The arena is also easily accessible by a number of buses that stop at North Greenwich station. 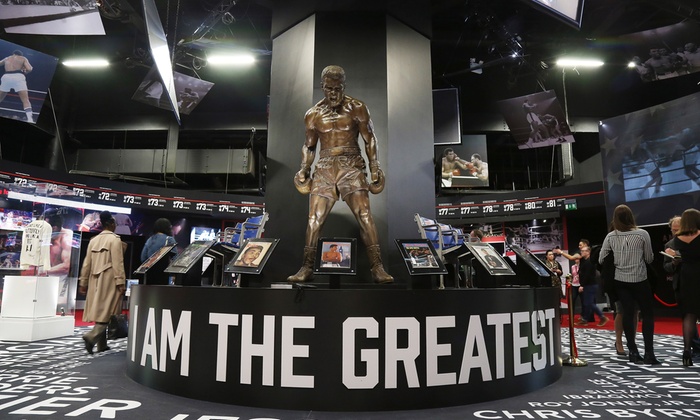 Yet to actually secure my ticket, I made a beeline straight for the box office which was just inside the arena entrance. Nervously hoping I hadn’t taken a long train trip for nothing, with my watch reading 11:55am the staff were only too happy to offer me a ticket for entry at 12pm. The process was quick and seamless, taking my name and contact email, taking payment, and then directing me on my way.

Fortunately the arena is also well signposted, and following the clear Ali Exhibition signs had me navigating to the exhibit without hassle. Along the way, I was baited by what felt like an endless string of restaurants attempting to lure me in. Though I had limited time to indulge for those who come in advance, or fancy a bite to eat afterwards, your ticket to the exhibition will grant you a 20% discount at many of these establishments.

Navigating the alluring spire of food, I could hear over the speakers commentary of some of Ali’s fights and figured I must be close, a little further and I had arrived, greeted by a friendly staff member who took my ticket, advised photography was fine so long as it wasn’t flash photography, and then directed up a large escalator. Atop the escalator, I was instantly greeted by a colourful mural of magazine covers that had been graced by Ali’s image that guided me through to the next door. 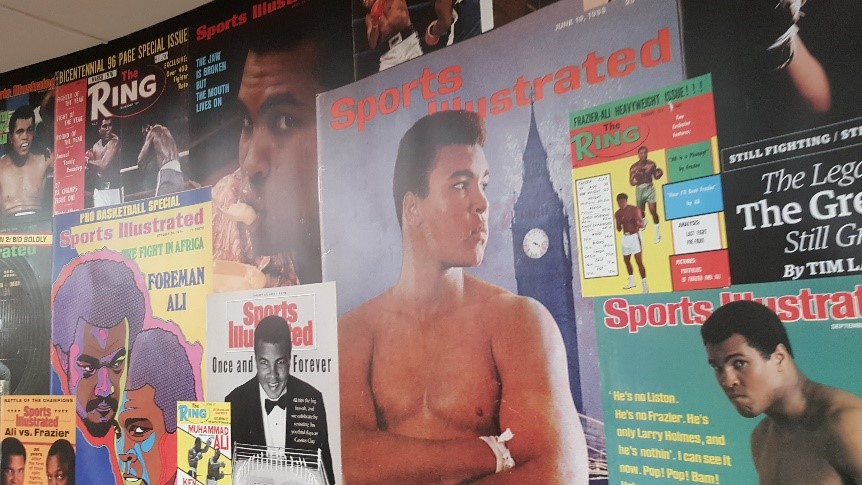 Emerging through the door I was quickly welcomed by an enthusiastic staff member who promptly offered me an audio guide (these are at no additional charge) and was directed through yet another door to where the exhibition truly begins. Shuffling into a dark mini theatre of sorts, a large screen plays footage of Ali’s renowned trash talk, the quotes echoed on the walls of the room emblazoned in a big bold font. A great way to set the tone for the exhibition, it had me in the mood for more.

Departing the dark room, I followed a corridor covered in black and white pictures of Ali, before turning into a better lit room. From here the story of Ali begins. Yet another screen briefed me on the stories of racism in Ali’s area during his upbringingand the stories of how he first got into fighting. Pictures of the home Ali grew up in, a replica of his childhood bike which had been stolen from him and a piece of the headboard from the family home. The area offered some good insight into the beginning of the Peoples Champion, but I had to think that the headboard was a big stretch for “memorabilia” and hoped this wasn’t a sign of things to come. 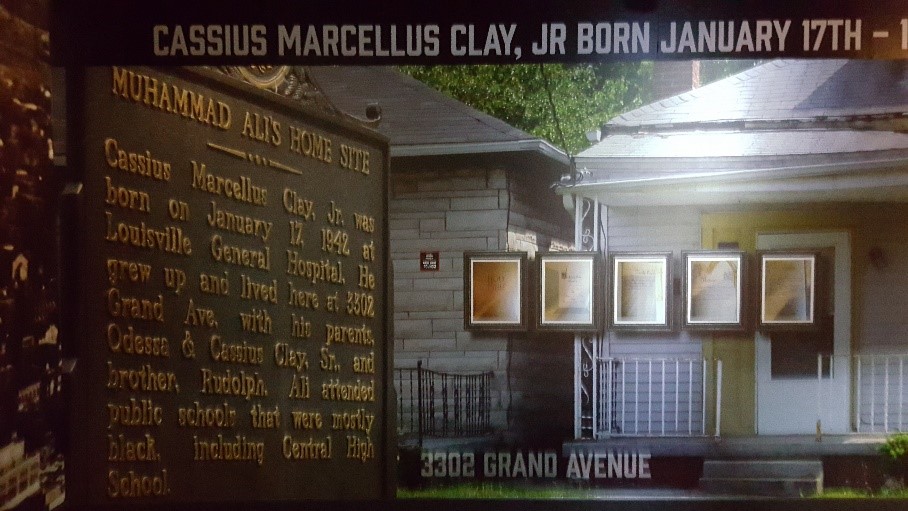 I then transitioned into a room based around Ali’s amateur boxing days. The walls were covered in old newspaper articles with sections about Ali magnified. It was an interesting insight to read recaps of a young “Cassius Clay” rising through the ranks. Again a big screen was prominent in the room, playing footage of Ali’s amateur career, along with various pieces of memorabilia. Upon closer inspection however, I saw that some of the items were “replicas” which took some of the lustre away. An example of this is the necklace below which was labeled “like” the one Ali was awarded when he won the Golden Gloves. This was cool to see but didn’t carry the impact that seeing the real thing would have. 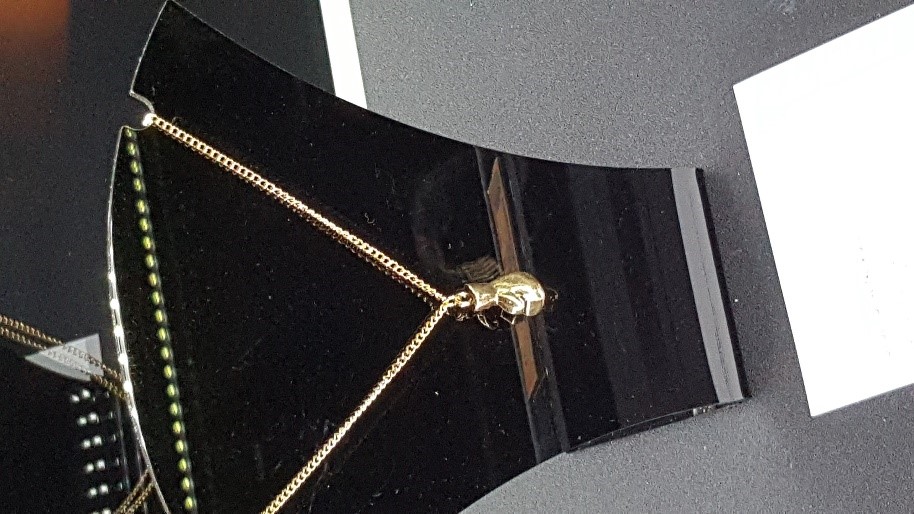 I ventured forth, this time into a room based around Ali’s Olympic exploits. Footage of his Olympic fights played on another big screen mounted to the wall, along with quotes about his time at the Olympics and grandiose pictures of Ali on the winner’s podium. This room moves into an area devoted to Ali’s late trainer and cornerman Angelo Dundee. It was intriguing to be given some insight into one of the key figures behind Ali, and this area was accompanied by some interesting memorabilia also including a ring that had been commissioned by Ali to celebrate his three times as world champion, but it would have been great to get more background on Dundee himself.

The Life of Ali.

From there I advanced into the core of the exhibition. A grand, circular room that immediately captured my eye, bright lights throughout, sounds, pictures and screens everywhere. The room had a very Las Vegas feel to it, glitzy and glamorous, with glass displays of robes, gloves and title belts. Excitedly rushing to check out the belts I again noted however that they’re replicas which took a little bit of the shine away.

Around the walls of the room featured screens dedicated to important Ali fights which would play footage of the fight, as well as recaps that could be read on the walls. A ticker went around the room above the screens displaying various Ali quotes while even further up a timeline of Ali’s professional fight history. In the middle of the room an array of various Sports Illustrated and Ring Magazine covers displayed Ali’s image, accompanied by an impressive bronze statue of Ali and seats from Madison Square Garden. Particular prominence is given to Ali’s defeat of Sonny Liston. 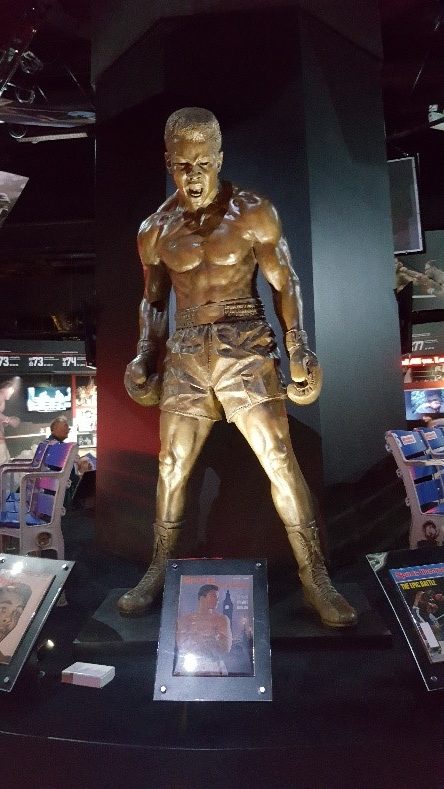 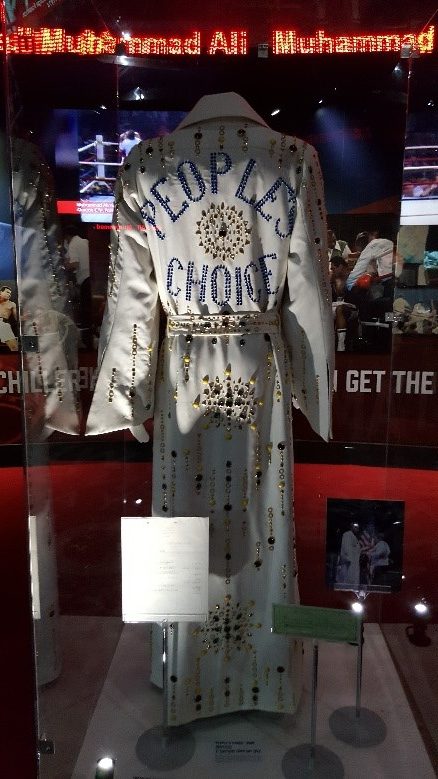 This room branches out into a number of side rooms each dealing with various topics and again there was plenty of screens to tell the story, with a number of large Ali quotes throughout to reinforce the messages being sent. Ali’s conversion to Islam and joining of the Nation of Islam and his refusal to fight in the Vietnam War are of course given a lot of attention, as is the infamous split glove from his fight with Henry Cooper. The fact that these gloves were there on display, not as a replica, was a very cool element of the exhibition. A true piece of history right in front of you. I also enjoyed the insight into Ali’s friend and bareknuckle Boxing icon Paddy Monaghan, and interesting pieces of memorabilia such as headgear Ali had signed for Sylvester Stallone. 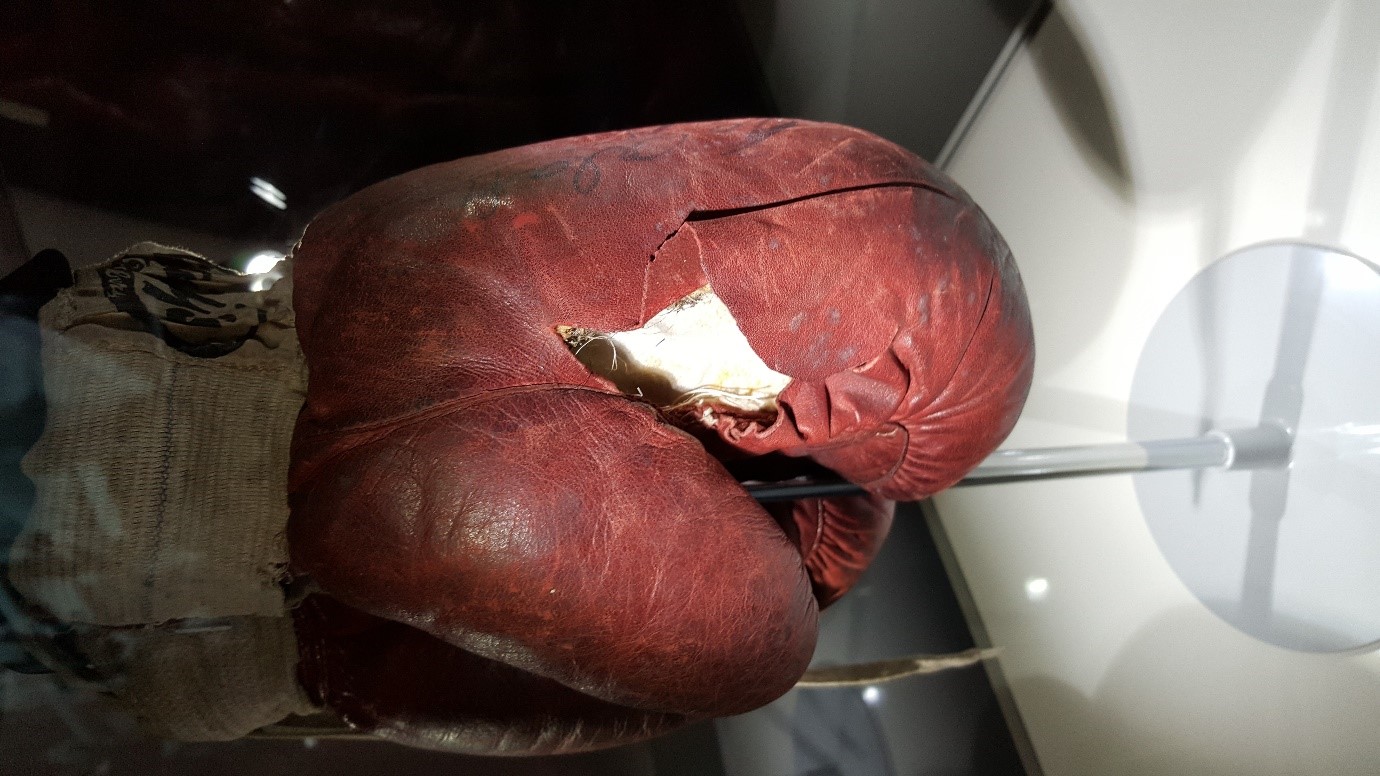 Having absorbed everything the circular room had to offer, I made my way to the grand finale of the exhibition. Within the room is a countdown clock for a 15 minute film that runs every half hour, en route to this room I was treated to being able to read pages from the Ali vs Superman comic book that had been put on the wall. Inside the theatre room, sections of the seating had been separated with boxing ropes which was a nice touch. The film, done specifically for the exhibit, was a great summary of Ali’s life, from the beginning right through to his Parkinson’s disease and did a good job of showing Ali’s charm and good will even in his tougher moments. A fitting ending to the exhibition.

After the film, visitors can go back through the exhibition or make their way into the gift shop. Wrapping up my adventure, I took to the gift shop to find a lot of appealing merchandise at quite reasonable prices. I took advantage of the two shirts for £30 offer, but there’s a wide array of products available. Mostly what you’d expect with clothing, keychains, posters, books etc. As well as the opportunity to have a photo in front of a green screen that will then put you into an image fighting against Muhammad. The staff in the gift shop were very helpful and pleasant. 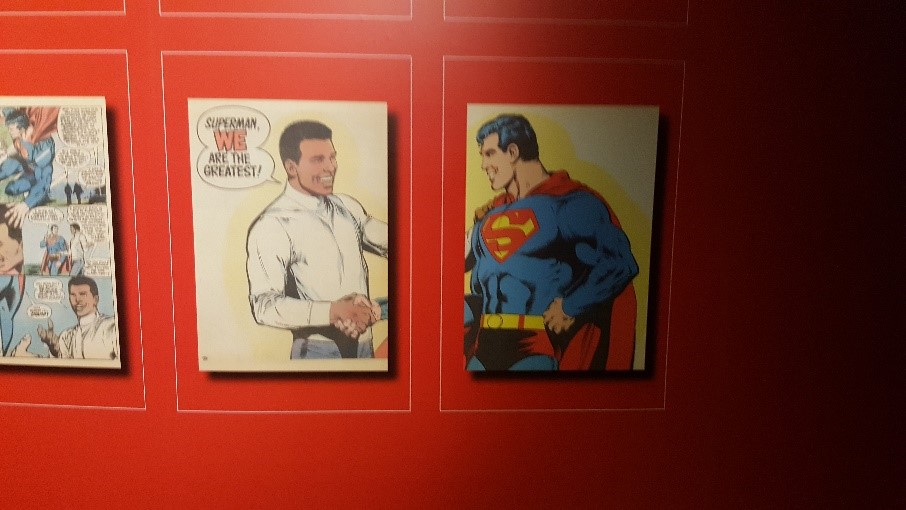 I left the exhibition with mixed emotions. It was great to go through the journey of Ali’s life, and particularly given his recent passing that aspect took on even more value than the exhibition would have offered prior. However, the fact a lot of the items on display were not the “real deal” took a lot of the awe away. As a result I felt at times that this was an experience I could have easily given myself on my computer by reading about Ali’s history and watching footage on YouTube. I appreciated the exhibition and the way it covered so many aspects of his life, but the exhibition itself didn’t feel like the spectacle that a man of his stature commands. Still, for fans of the Lousville Lip, or for those looking to get a better understanding about who he was, a worthwhile way to spend a couple of hours.

This review was authored by James Wells, one of our guest writers. You can find him on twitter under the handle @WellsNorthShore

A good overview of Ali's amazing life, but replica items spoil the experience.

Fun
7
Customer Service
8.5
Value For Money
6
Easy to get to
8
Add your review  |  Read reviews and comments

A Guide to London Customs and Good Manners