This weekend I took another trip into the centre of my home borough Ealing in search of somewhere new eat. I’d promised myself that I would make an effort to try some of the new establishments that are opening on an almost weekly basis in Ealing Broadway. If you are a visitor to London and have no idea where Ealing is, it’s in zone 3 of the London underground network on the central line and is well worth a visit for decent bars and modern restaurants (that are way cheaper than central London).

I’d walked past Limeyard many times, which is located on the high street just outside the shopping centre, and had always thought it looked worth trying. This clearly wasn’t a chain restaurant and even from the outside I could tell it has its own vibe going. The Limeyard is a modern American kitchen with a rustic, comfortable and cosy atmosphere. The formalities of a central London restaurant are not observed here but it’s more upmarket than a nando’s, it occupies the centre ground in its culinary offerings and price. 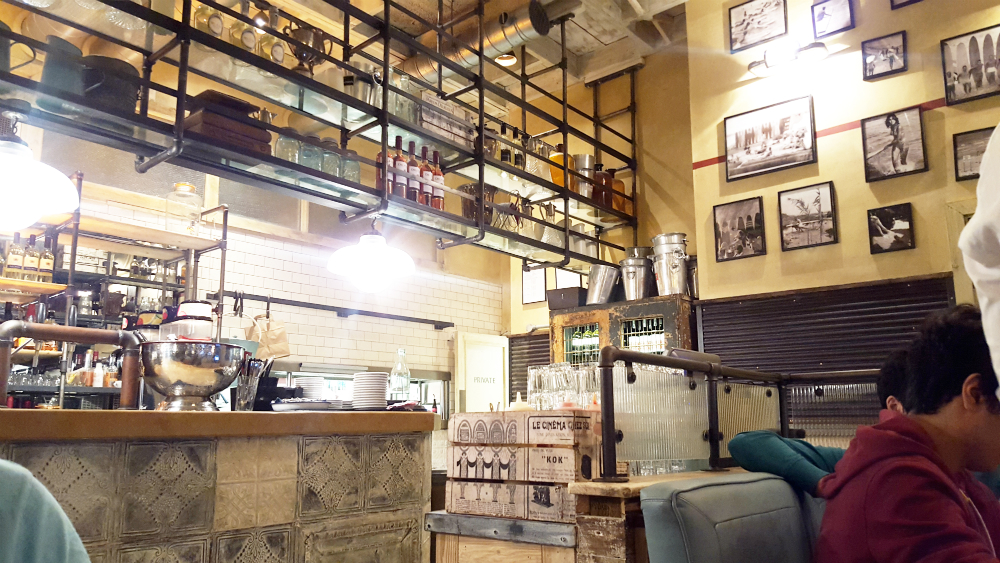 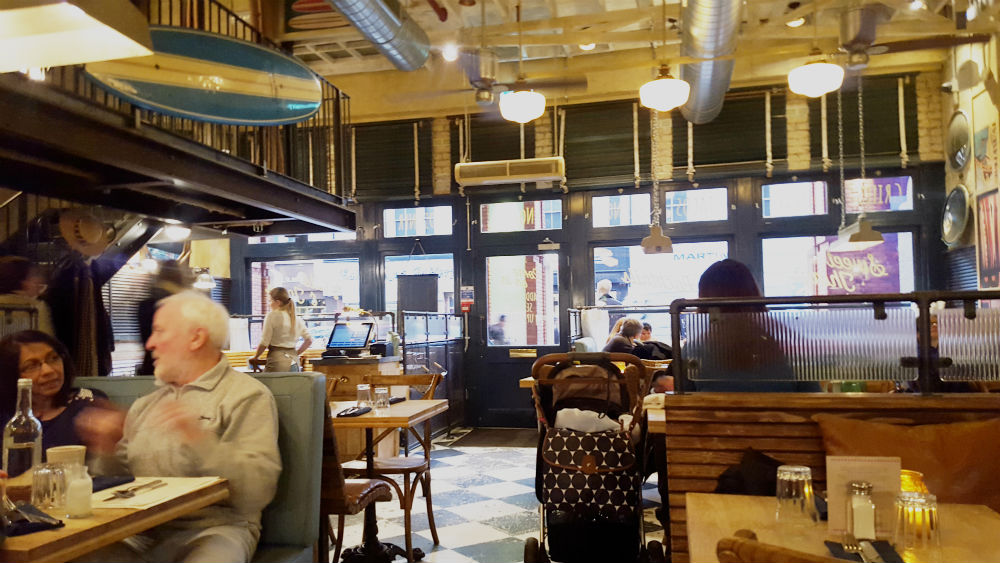 The food on offer at the Limeyard Ealing is unashamedly American, although it’s nothing you haven’t seen before. An array of meats, fish, burgers and a few veggie options don the menu, as well as the cliché US import, Tacos. As you can see from the photo below I had the brunch menu which is served until 4pm, the dinner menu is much the same with a bit more variety and some sharing options. 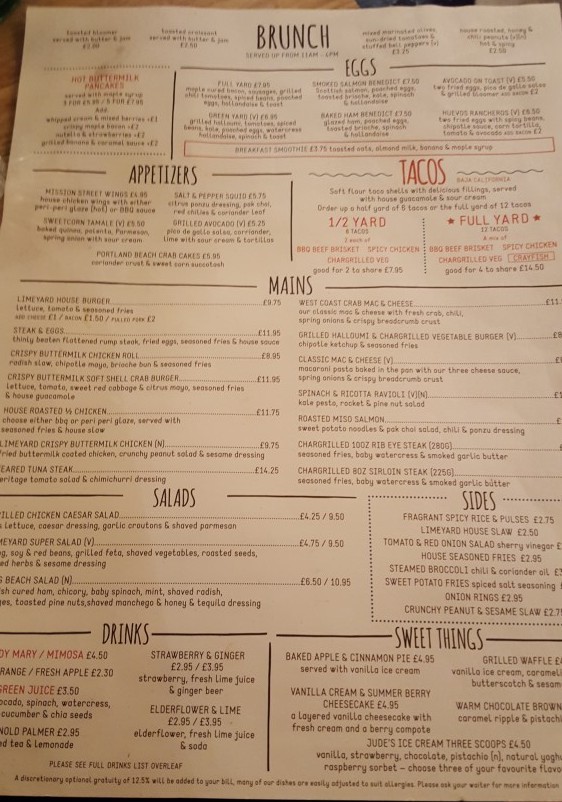 Whilst the Limeyard markets itself as an American kitchen, it does so subtly. This is a modern restaurant that combines American food with British sensibilities and there isn’t anything that’s too brash, which can sometimes be the worry when we hear the term ‘American food’.

We were taken to our table and given a named waiter who was very friendly; clearly this independent restaurant takes customer service very seriously, a trait that can be lacking in chain restaurants. Our drinks arrived quickly and we ordered food within 10 minutes of being seated. Our ever friendly waiter managed to convince us to order a starter which is a skill I’m sure the managers value – not that he was pushy, I was just very hungry and therefore didn’t take that much convincing.

For starter we ordered some chicken wings to share. You can’t go wrong with chicken wings in an American kitchen, surely? I was right, the wings were delicious! Let’s just say that they beat anything I’ve had at Nando’s (and I really do love Nando’s). Succulent yet slightly crispy, these were cooked to near perfection and the quality of the meat was about what I expect for the price. 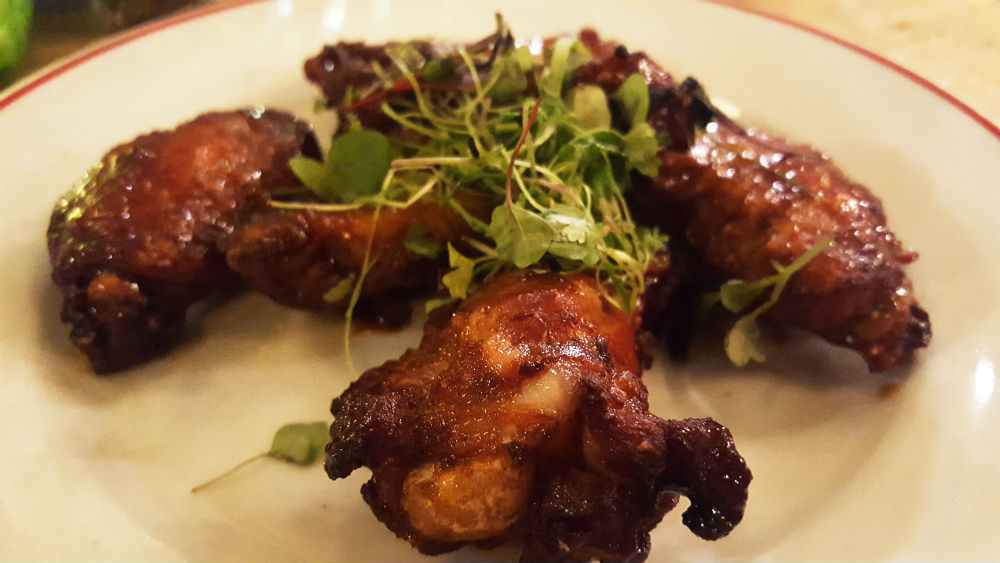 The success of the starter only intensified by chicken craving, so I ordered a roasted half chicken with fries and coleslaw for main. My guest was allowed to choose from the dinner menu we had seen outside because it was almost 4pm, but do be careful because some of the options on the menu outside may not always be available. He chose what seems to be the signature dish of the Limeyard, the Coca-Cola glazed rack of ribs which are slow cooked for 8 hours. If anything I was curious to see what they meant by ‘Coca-Cola glazed’

The mains arrived within 15 minutes of finishing the starter, which was almost too quick; I’d have liked a bit more time to get an appetite back after I pretty much ate the entire starter I was supposed to share. Regardless of my greed I was still happy to once again smell the delicious scent of charred chicken. 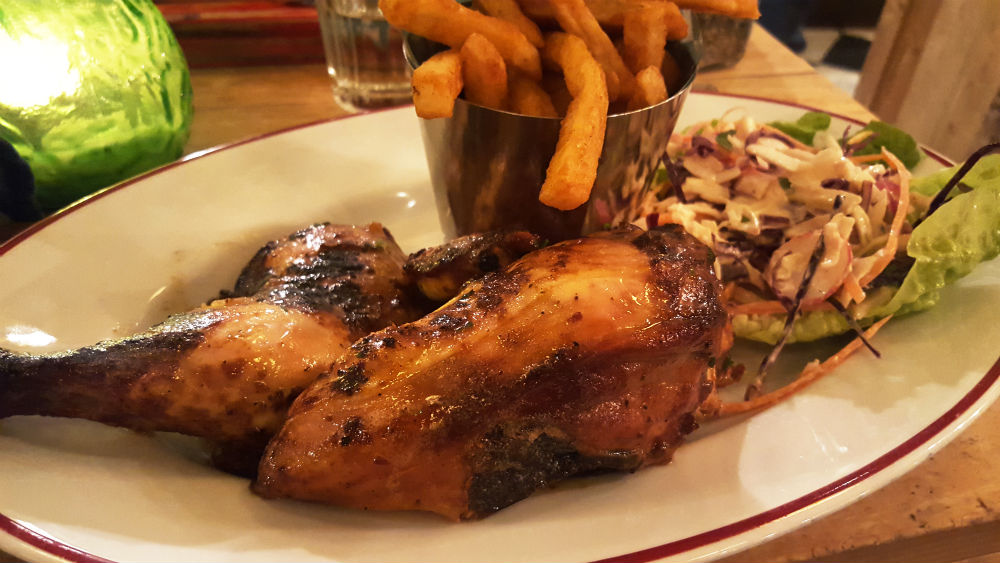 My half chicken looked fairly basic on the plate (what can you really do with a bit of chicken, some chips and a leaf) but I can tell you that the taste was anything but. Most of the chicken fell off the bone and was as far from dry as you could get. The chips and coleslaw were, well, just chips and coleslaw but they made an appetising addition to the star of the show.

My guest’s rack of ribs looked anything but bland. Ribs are my favourite type of meat and part of me was jealous of him for having chosen what looked like a real treat. The ribs were accompanied by sweet potato fries and a Cola-Cola bottle full of BBQ sauce – whether the sauce was made with actual cola-cola wasn’t obvious but it was still a nice touch. I was graciously offered 1 rib to try and discovered that my jealousy was justified, the meat was tender and soft and there was plenty of it on the bone. The chefs at Limeyard must take their meat very seriously and it pays off in dividends, I’ll certainly be coming back for more. 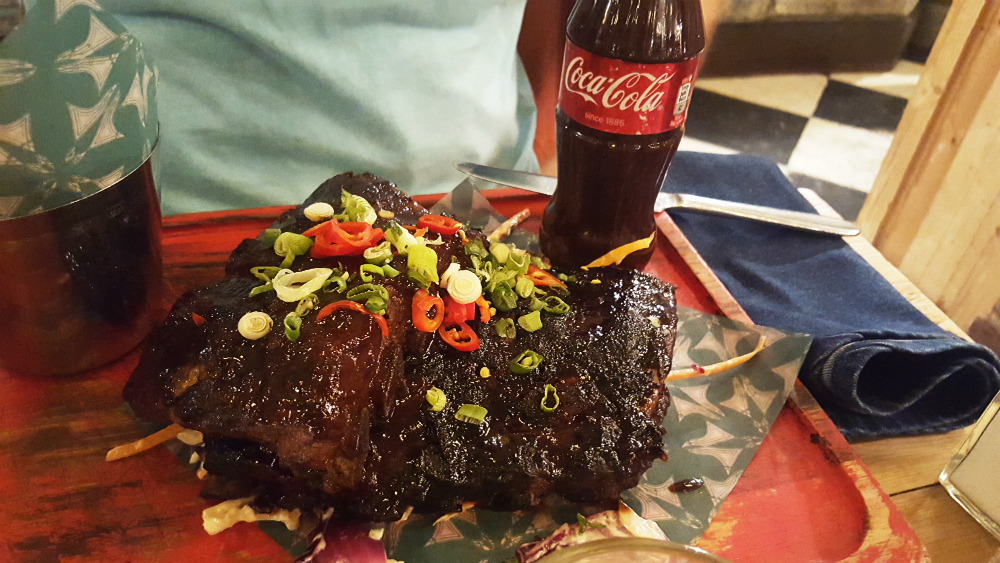 The meal breakdown was as follows:

This newish Ealing restaurant is clearly trying to stand out from an increasingly crowded marketplace of west London restaurants, and I think it’s succeeding. The staff are naturally friendly, the interior is comfortable and relaxed, the food is delicious and the price is more than reasonable. I think they could be a bit more creative with their menu; american cuisine gives you the opportunity to have some really unique dishes. I would be happy to recommend the Limeyard as a meat lovers paradise because you really can’t fault the cooking, I’ll certainly be going back to try something other than chicken!

For more info on Limeyard Ealing check out their website: http://limeyardrestaurant.com/ (it says they do takeout, omg)

Children's tickets are free at The Shard this half term!